This article is about the LEGO device. For the extension, see LEGO MINDSTORMS EV3 Extension.

The EV3 is a robot programming kit from Lego. It is the successor to the NXT. Although the EV3 family has two kits, the two kits mainly have the following: motors, a brick ("computer" of the robot), and lego parts. 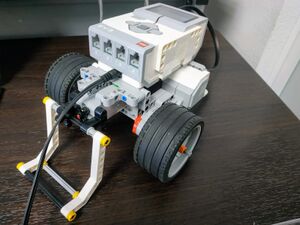 A robot built with the EV3 kit

EV3 has now stopped production officially from late 2021, to be replaced with the 51515 kit, which Scratch does not yet support.

The EV3 Education kit has the following features:

The Home kit does not include a gyro or ultrasonic sensor, but does include an infrared sensor. It does not have stackable brick, but it uses beams.

Touch sensor is a sensor that has a plus-shaped button on it. Whenever it is pressed, it will send it to the brick, which is the Controller of the EV3. It has an axle hole for extra button changes.

Gyro Sensor measures any change from start direction point. Any movement of its angle can be seen. The Start Point is 0 and when it changes its angle the Gyro Sensor will change its value and send it to the brick. The recommended debug method for this glitchy sensor is to reconnect the wires. Only in educational kit.

A mini camera that can be used on following color tracks. It is a combination of the NXT Color Sensor and Brightness Sensor. Which their functions are featured in the EV3 Color Sensor. It also added more colors that before. The big camera is Color, and the small camera is for brightness. It can detect colors listed below:

2 Blue (Lego Blue, may not refer as any kind of blue)

4 Yellow (Lego Yellow, the same color as the Lego Logo)

It shoots sound waves and hear their echoes so it knows where is the target object. Not included in home set. Its "eyes" are rounder and bigger than the IR (Infrared Sensor).

Using the beacon, it can be controlled. It is a remote control sensor. Only in home set, and has narrow "eyes".

Wires and ports that allows electricity and data (such as sensors to the brick and the computer) to send in and out. 1234 is used for input from sensors while DBCA (named ABCD, but read DCBA from left to right) is used for output to motors. PC is an input but it is placed in the output side.

Retrieved from "https://en.scratch-wiki.info/w/index.php?title=EV3&oldid=316671"
Cookies help us deliver our services. By using our services, you agree to our use of cookies.
Categories:
Hidden category:
The Wiki is working on a dark theme, and you're seeing it! Got feedback? Post on the Wiki Forum Topic.