A dialog (also known as dialogue) is a user interface element that is used to display messages and provide interactivity. Some types of dialogs Scratch uses are help dialogs, file chooser dialogs, and message dialogs. 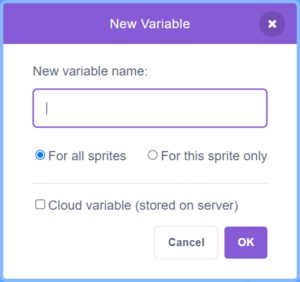 The dialog box when creating a variable.

When a variable is being created, it is done in a dialog. This dialog has a place to type the variable's name, and radio buttons determining the scope. Scratch 2.0 has a Cloud Data checkbox as well.

When creating a custom block, a dialog with the name and arguments, as well as buttons to add arguments, is shown.

File selection dialogs are used when importing or exporting something. They show files and folders in the current directory, a way to go to the upper directory, a directory tree (by clicking the dropdown with the current one's name), and some common places. In exports, it also contains a place to write the filename.

The media library includes sprites, costumes, and sounds. The library dialog contains filters to sort the media. It also has a search bar.

Sprites can be sorted by category, theme, type, or what media it features (scripts, costumes, sounds). If it has multiple costumes, they can be toggled with arrows. Information is shown in a tooltip.

Costumes can be sorted by category, theme, or type, but scenes only by category to theme.

Sounds can be sorted by category. It shows the duration in seconds, and a button to preview the sound.

A costume can be created through the camera dialog, which allows a user to take a picture using their webcam.

The sound recording dialog is shown when a user creates a sound by the Record button in the Sound Editor, or by the "record..." option in Dropdown Menus for Sound Blocks.

The quit dialog is a feature shared by nearly all programs.[citation needed] When the window is told to close, if the project is not saved, this dialog appears asking if the user wants to save, quit, or cancel.

Some features that nearly all dialogs share are the buttons. A dialog with user input always has at least two — OK, and cancel. The help dialog, or a message dialog such as one produced by the show dialog [info] with text [] ::sensing block in Panther, only has an OK button. The styling of a dialog is usually uniform across a program.

Images of the different types of dialogs presented in this article are shown below.

Retrieved from "https://en.scratch-wiki.info/w/index.php?title=Dialog&oldid=268267"
Cookies help us deliver our services. By using our services, you agree to our use of cookies.
Categories: