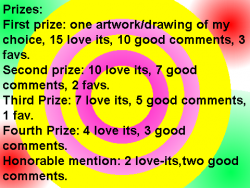 A competition (often referred to as a contest) is an event held by Scratchers that usually involves creating projects or art and competing against other users. Examples include the Scratch Olympics and the Scratch Cup. Prizes can include love-its, art requests, shoutouts, follows, and being in the competition holders' animations. Judging is often done either by the organizer or by the community by taking views and love-its into account[citation needed].

Most contests have rules[citation needed]. Some rules might include:

One issue about competitions is that prizes are hard to pick. Awarding love-its and favorites as prizes is often looked down upon[citation needed], but some users find it difficult to make other prizes, usually because of their art or programming skills not being very good. Some users settle for some of the following:

The Collab Challenge was an official competition in early 2011 where groups of Scratchers had to collaborate to make a project using certain sprites. The winners were featured on the front page in the curator slot over a period of two weeks.

This event was followed by the Collab Camp, a similar recurring contest with the same prize for the winners. The theme in this camp was to create projects that expressed or interacted with music.

Each of these competitions has its own theme for entries. So far, there have been two Collab Camps.

Retrieved from "https://en.scratch-wiki.info/w/index.php?title=Scratch_Competitions&oldid=315239"
Cookies help us deliver our services. By using our services, you agree to our use of cookies.
Categories:
The Wiki is working on a dark theme, and you're seeing it! Got feedback? Post on the Wiki Forum Topic.