Comments in the Scratch program are adjustable textboxes that can be attached to blocks, or left floating. The comment boxes can be adjusted both horizontally and vertically, dragged around the Scripts Area, and deleted. In a survey conducted by the Scratch Team, which tried to identify the top scripts used by Scratchers, the comment block (which was accidentally found by the survey engine due to technical reasons) ranked 10th, is 0.68% of all scripts on the website.

The old comment block from the Scratch 1.2 beta. It can still be found in old Scratch projects that used the block.

The Scratch 1.2 beta introduced a comment block as a Control block that could be placed inside a script as one of its blocks. This grey block could have text entered like a normal comment but was a block instead of the side-attached comments seen today, and still featured mini-comment and full-comment modes. It made no change to the script, as it only held text — however, newer users grew confused about it, causing it to be removed in the official Scratch 1.2 release.

The offline player will treat the comment block as an obsolete block, and as such, stop the script that contains the comment. This can be a problem for old projects that contain the comment block. While users who were active around the time of removal would have removed it, those who did not would see issues with the project.

Both the Scratch Team and the Scratch community wanted the ability to add comments to scripts in order to improve their readability. Scratch 1.3 introduced the modern comments that are still used today. Since Scratch 1.4, comments can be stuck to a block so that comments remain attached when a script is dragged around. The font used with the comment block, also used in drop-down menus, was changed to Verdana with Scratch 1.3. 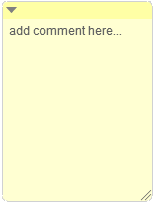 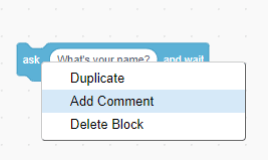 To add a comment to a block, right-click it, and in the drop-down menu choose "add comment". This will add a yellow box in which you can type your comment. Comments can be added anywhere in the Scripts Area the same way.

A main use for comments is to explain how a script is working. An example is below:

Another purpose of the comment feature is to provide some hidden info the user wishes to not share in the Notes and Credits.[1]

Comments can be shaped in two ways — a full comment or a mini comment. The type can be changed by clicking the gray triangle at the upper-left of a comment.

Mini comments are one line long and hold the amount of characters that will fit on one width of the comment. Change from Mini to Full by clicking the triangle at the top left of the comment. Full comments display all text entered into it, which can extend infinitely.

The width (size) of comments can be altered by clicking (the parallel lines at) the bottom right-hand corner of the comment and dragging to the desired width (size). This can also be extended infinitely and is particularly useful if the mini comment is too narrow to display a sufficient amount of characters.

To use comments in the blocks plugin, simply add add two slashes (//) after the block to be commented, and add the annotation after that. This syntax is derived from comments in most high-level languages. Comments in the Block Plugin look like:

Retrieved from "https://en.scratch-wiki.info/w/index.php?title=Comment_(programming_feature)&oldid=282981"
Cookies help us deliver our services. By using our services, you agree to our use of cookies.
Categories:
Hidden category: