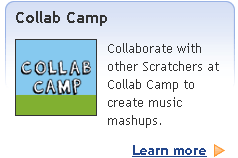 The sidebar shown on the Front Page during Collab Camp 2012.

Collab Camp was the second collaboration event on the Scratch Website (after the Collab Challenge).

On August 13, there was a meetup at the MIT Media Lab for Scratchers participating in Collab Camp.

The theme for the 2012 Collab Camp was Music Mashups, announced on February 8, 2012. The collab groups had to share their initial drafts by March 11, and the final version March 31.

Collab Camp includes counselors — these users, chosen by the Scratch Team, are there to help answer questions, provide feedback, and support the camp. The users chosen in 2011 were (in alphabetical order):

The users chosen in 2012 were (in alphabetical order):

A special forum was created for each event. It was similar to the regular Collaboration forum, but only for Collab Camp events.