Clutter was a website created by paulmedwal, a member of the Scratch Team, that allowed users to put Scratch projects together in a sequence called a "clutter", much like a slideshow.

The site was released in late October 2010 and was run side-by-side with the Scratch site. It had 190 registered users with 172 clutters.[1] In late 2012, a notice was put up informing users that the site was in read-only mode and that it would soon be shut down.

A series is a group of projects that are to be played in order, the purpose of Clutter.

Clutter allowed users to do the following three things:

A secondary use of Clutter was to test new ideas that can help shape the development of Scratch 2.0.

In a story clutter, the projects were in a specific order, chosen by the creator. The project could be changed by clicking the arrows at the bottom, or by broadcasting -> or <-, to go to the next or previous project, respectively.

In a link clutter, the projects did not come in any specific order. Instead, users had to type a word that determines the project. Each word was chosen by the creator. Broadcasting ->project name, where project name is the name of the project, will also change the project.

This type was similar to a both the other types of clutters. In a secret word clutter, the projects were in a specific order, and can only go forward. This type was generally used for multi-level games. The creator chose a secret word that had to be typed in order to go to the next project. Broadcasting -> also went to the next project in the clutter.

Then a user had to fill in the following information: 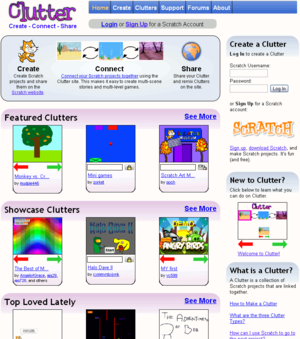 The main page was similar to the Scratch front page. It had Featured, Top Loved, Top Viewed, and Top Remixed sections, as well as statistics about the site. Unlike the Scratch Front Page, however, it also had Showcase and Fan sections and lacked a Newest Clutters row. 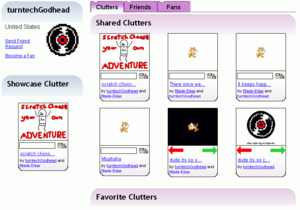 A userpage on Clutter, showing shared clutters and the showcase clutter.

Clutter user pages were different than Scratch My Stuff page. It had these areas:

There were also forums designated specifically for Clutter. These forums were:

The forums disappeared not long before the website was shut down.

On one's user page, there was an option to showcase a clutter. This is an experimental feature that was eventually implemented into Scratch 2.0. A user could choose a single clutter to show on the sidebar of their user page, underneath their information. This allowed the owner to show their best project in a noticeable place, which many people want.

Users on Clutter received notifications for the same reasons that users on Scratch do, with the exception of becoming curator.

The following people worked on or helped with the Clutter project:

Retrieved from "https://en.scratch-wiki.info/w/index.php?title=Clutter&oldid=320017"
Cookies help us deliver our services. By using our services, you agree to our use of cookies.
Categories:
Hidden category:
The Wiki is working on a dark theme, and you're seeing it! Got feedback? Post on the Wiki Forum Topic.