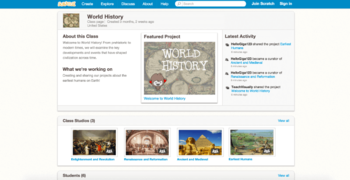 Student and Teacher accounts are special types of accounts which allow Scratch for classroom use. They have the ability to participate in classes. The teacher accounts were released for beta testing by a selected group of teachers in late January 2016, and were officially released in mid-August 2016. 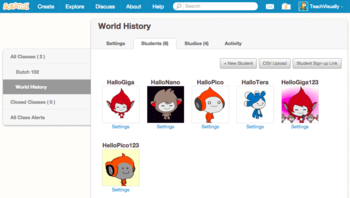 The first class was created in July 2015, most likely for testing purposes.[10]

In October 2015, further knowledge about this feature was revealed with the public discovery of the Scratch Development server.[11] This was followed by the discovery of more student and teacher accounts.[12] The feature was confirmed by the Scratch Team.[13] It is now known that these accounts have been added to Scratch, but may not be ready for the public for some time.[14] These accounts are now more widely known among community members, and have been discussed frequently.[15][16] 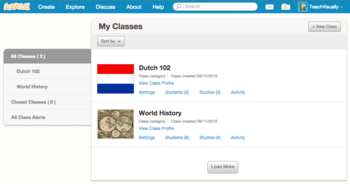 The teacher who wishes to make a class must first register an account on the For Educators Page. Then, the user will have the account, but will be not able to use the teacher features until the Scratch Team checks the account and verifies that the account creator is an educator, which usually takes up to one day.[17] Once approved, the teacher will have the ability to create a class. Then the class can be opened, and the teacher can invite students with a link.[18]

In addition, each student will have their own Profile Page. A class page can be created by the teacher, which displays the students, and class studios.

The teacher will be able to see all of the activity of their students, including when they:[20]

Teachers can also delete their students' comments on profiles and studios.

Teachers are able to edit students' profile pages, including their About Me and What I'm working on sections and profile picture.

Teachers used to be able to delete student's comments on projects and unshare students' projects.[20] This was removed with the release of Scratch 3.0. However, they are still able to delete profile and studio comments made by students.

Retrieved from "https://en.scratch-wiki.info/w/index.php?title=Student_and_Teacher_Accounts&oldid=311459"
Cookies help us deliver our services. By using our services, you agree to our use of cookies.
Categories:
Hidden category:
The Wiki is working on a dark theme, and you're seeing it! Got feedback? Post on the Wiki Forum Topic.