On April 12, 2022, the filterbot temporarily stopped working.[1] As a result, users could post any inappropriate comments without being muted, and accounts with prohibited usernames were created.[2] Users could also comment large numbers, which is normally prevented by the phone number filter.[3]

A number of Scratchers received inappropriate comments and spam on their profiles, primarily users who were active on the forums.[4] Additionally, the censor for account creation was also not working, so a number of accounts with inappropriate usernames were created.[5]

Many forum topics were created asking questions related to the outage.[6] 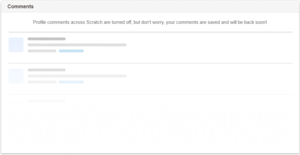 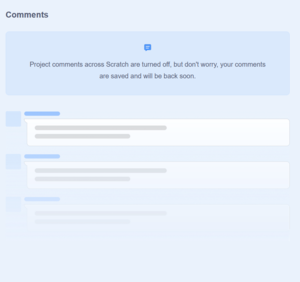 In order to limit the effects, the Scratch Team disabled comments on projects, profiles, and studios as well as the forums.[7] The Scratch Team also released a statement via Twitter, stating that the commenting had been temporarily disabled due to "a technical issue".[8] The Scratch Team officially announced that comments were re-enabled at 3:37pm Scratch Time,[9] at which time the filter was working normally again. Additionally, Scratch Team member Paddle2See later confirmed that there were issues with the filtering system and that they were not the result of an attack.[10]

On the Twitter post about the technical issues, the Scratch Team hid replies saying that the filterbot was broken.[11] They also deleted some forum posts about the issue.[12] This caused some users to criticize how the Scratch Team handled the situation.[13] Paddle2See explained that the posts were deleted to prevent the issue from being exploited.[14]

Retrieved from "https://en.scratch-wiki.info/w/index.php?title=Filterbot_Outage_on_12_April_2022&oldid=317991"
Cookies help us deliver our services. By using our services, you agree to our use of cookies.
Category:
The Wiki is working on a dark theme, and you're seeing it! Got feedback? Post on the Wiki Forum Topic.