The censor, also known as the bad word detector[1], filterbot or simply filter, filters certain words or phrases and alerts the user that what they wrote is against Community Guidelines. As a rigid rule, profanity is a violation of the Terms of Use and Community Guidelines. As such, all parts of the Scratch Website and Scratch Wiki utilize some type of censor. Additionally, posting references to inappropriate topics or links to unmoderated chat sites are also often censored. 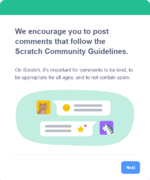 The error message that shows when commenting something censored 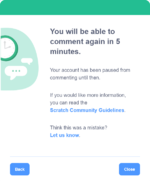 The second message explaining a user is temporarily muted

In addition to inappropriate words or phrases, the censor also filters out a number of other things that are not necessarily inappropriate but nevertheless unsuitable for Scratch. Notably, the word "discord" is censored regardless of context since it is the name of a service that allows private or unmoderated chatting.

On the Scratch Discussion Forums, censored words are replaced with an asterisk. No notification is sent upon posts with censored words, but if any are found, users are encouraged to report them.[citation needed]

If someone creates an account that contains vulgar or censored terms, "Username not allowed" will be shown to the right of the screen.

Censor of the Scratch Wiki

The Scratch Wiki has its own censoring system, using the MediaWiki extension AbuseFilter. It prevents actions from happening if anything contains inappropriate language, and otherwise blocks guideline-breaking actions.

On the Scratch 1.x website, until late 2011, any word or phrase containing a censored string (such as "skyscraper", "grape", or "push it") was blocked due to an issue known as the Scunthorpe problem, where a censor encounters a false positive and flags a string not intended to be flagged. Since then, a whitelist was added containing many words and phrases that incorrectly trigger the censor.[4]

The censor technology sometimes causes problems in languages other than English. Swear words in those languages (unless spelled exactly the same as in English) are not censored.[5] Also, censored words in English may have other meanings or be included in words in other languages.[6]

With the spam filter, there have been problems such as the censor stopping users from posting innocent links, such as project and studio links.[7]

On April 12, 2022, the censor stopped working completely because of issues related to the system[8], which resulted in a large insurgence of trolls registering accounts with inappropriate usernames and submitting inappropriate comments and Discussion Forums posts. As the result, all comments were closed and hidden from the public and the Discussion Forums were put under Maintenance Mode until the censor returned back to normal.

It has been alleged that the Scratch Team had forgotten to censor certain terms, even major vulgar insults. While some minor profanities remain uncensored, they are still censored in the forums, which confused many to think that it was censored. In addition, using blank tags can also help bypass the censors in the forums.[15] Innocent terms, such as "homophone," were censored due to typos, but were later on uncensored after the Scratch Team had confirmed that these censors were made due to typos.[16]

Retrieved from "https://en.scratch-wiki.info/w/index.php?title=Censor&oldid=307495"
Cookies help us deliver our services. By using our services, you agree to our use of cookies.
Categories:
Hidden category:
The Wiki is working on a dark theme, and you're seeing it! Got feedback? Post on the Wiki Forum Topic.