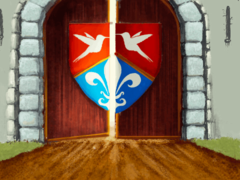 An example backdrop in the Backdrop Library.

A backdrop is an image that can be shown on the Stage. It is similar to a costume, except that it is shown on the stage instead. They are located in the backdrops library.

The Stage can change its look to any of its backdrops using the Switch Backdrop to () block. They can be named, edited, created, and deleted in the Paint Editor.

Scratch 3.0 has the following 5 blocks related to backdrops. Click on a block to learn about it.

Backdrops are edited in the Paint Editor. They are found in the backdrops tab in the Stage. New backdrops can be chosen from the library, painted, uploaded, or chosen as a surprise. When a new backdrop is painted, one can change the color, the size of the brush, or one can use the paint bucket tool to fill in lots of space. One can also create shapes such as squares and circles. When one chooses a backdrop one can pick from 85 different backdrops. One can also edit those backdrops and draw on them.

Backdrops can work in a similar way to broadcasts, and Sprites.

When a backdrop is changed or clicked, it sends an event picked up by the When Backdrop Switches to block. As with broadcasts, backdrops be started from any sprite, and can also have their own script wait until the backdrop finishes, by using the switch backdrop to ( v) and wait block.

There were originally blocks planned for scrolling the backdrop in Scratch 2.0. They were removed before release, and some users have suggested bringing them back.[1]

Retrieved from "https://en.scratch-wiki.info/w/index.php?title=Backdrop&oldid=312257"
Cookies help us deliver our services. By using our services, you agree to our use of cookies.
Categories:
The Wiki is working on a dark theme, and you're seeing it! Got feedback? Post on the Wiki Forum Topic.