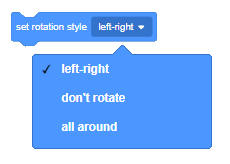 A drop-down input is an input that contains a string value that cannot be changed except by clicking the downwards arrow to the right. When the arrow is clicked, a menu of available options appears for the user to choose from. To choose an option, click the option you need. Sometimes, menus will be so long that they don't fit into the maximum space a drop-down takes, in which case a down arrow appears at the bottom and an up arrow appears at the top of the menu. When one hovers their mouse below or above these arrows, respectively, the menu scrolls down or up to show all the options.

There are two types of drop-down input. The first type of drop-down is rectangular and has the same color as the block it is in. Other blocks normally cannot be placed inside these inputs. Other drop-downs are round and have a darker color. This is caused by a limitation in the Blockly engine which blocks run on. The distribution of these types of drop-downs seems arbitrary (for example, When I Receive () has a square drop-down while Broadcast () has a round one).

Drop-down arrows can also be added to string or numeric inputs, to give easy access to common values in those inputs or to give access to values that cannot be there normally, such as the various values in the numeric input in the Point in Direction ().

Retrieved from "https://en.scratch-wiki.info/w/index.php?title=Argument&oldid=309916"
Cookies help us deliver our services. By using our services, you agree to our use of cookies.
Category:
Hidden category:
The Wiki is working on a dark theme, and you're seeing it! Got feedback? Post on the Wiki Forum Topic.