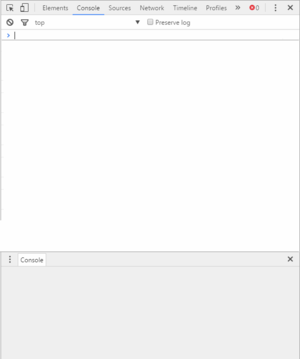 The Developer Tools is a feature in most desktop browsers that allow one to play around with code. Here, we will be viewing the Console of Scratch's editor to add user-generated extensions. We will use the Console to enter code that runs a script that adds scratchblocks do not exist. This adds the blocks to the extension category, but there is also some other info in the coding such as how to run the script, what link to connect to once the help button is pressed, and way more. However, with such an intriguing feature comes some other side effects.

When you want to get an extension, you need to know your way to the console. After loading the Project Editor, you can press Customize and Control Google Chrome, then press More Tools, and finally Developer Tools on Google, or Settings, then Developer Tools on Internet Explorer. It is unknown for Mozilla Firefox. Once you are there click the Console Button to open the actual console. Now you just need to get your code.

Scratch Forums has an official topic made for these extensions, also called experimental extensions. This forum can be found here. Once you have found your code, copy it to your clipboard and go to the Project Editor's console. Then in the area where you are able to type, paste your code and press enter to activate it. Once that has been done, your extension has been added to the project.

Due to these being unofficial extensions, there are some side effects with activating them. These side effects include the following:

There was another way to add extensions to the offline editor by going to ScratchX, downloading the ScratchX URL, going to offline Editor, shift-clicking File and pressing Import experimental HTTP extension, then loading it.

Retrieved from "https://en.scratch-wiki.info/w/index.php?title=Adding_Extensions_via_Developer_Tools&oldid=241026"
Cookies help us deliver our services. By using our services, you agree to our use of cookies.
Categories:
The Wiki is working on a dark theme, and you're seeing it! Got feedback? Post on the Wiki Forum Topic.