An Account or Icon trend is a trend related to information on the profile of the participating user or the user icon of the user. 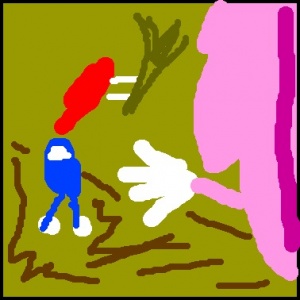 An example of an icon which has been restyled by var0. The link to the original is in the description of the file.

A user, var0, launched a project accepting requests of user icons.[1] This was first unknown until djdolphin requested a restyle of their icon. This passed on to other Scratchers who then requested a restyle of their own icon, due to the simplistic and hilarious results. This trend transformed a small user icon shop into a base of this popular trend.

However, due to account migration by var0, the shop was closed and this trend is no longer alive.

Via Inspect Element, getting back to "Location not given" was possible.

This started by using locations with interesting names as a country such as "Antarctica", "Heard and McDonald Islands", "Christmas Island", and to revert to "Location not given". In addition, Scratchers have discovered that two-letter country codes (must exist to work) can be set as a location in place of traditional countries, such as "United States", which could be replaced with "US" with Inspect Element.[2] It has also been discovered that users can go to account settings and double-click on the "Save my Changes" button to set it to "Location not given".[3] This has become a way to make an account look interesting or even funny.

An example of a fake location

One of the most popular country code locations is "ST", a joke reference to Scratch Team. In reality, however, ST refers to São Tomé and Príncipe. Some Scratchers who are really active in the Advanced Topics forum set their location to "AT" (Austria). The ways to get two letter locations or "Location not given" have since been fixed.[4]

Some users have created accounts specifically for roleplaying as their own characters. They'll usually roleplay as the featured character and post projects about their character. It's common for fan characters and existing canon characters[5] to be role played by account but rare for original characters.

In the month of June, it is a common tradition to have an icon in a theme of LGBT pride, which means to include rainbows in their icons. Many user icons were revamped to have a rainbow background, while some were not a revamped version.[6][7]

Some Scratchers who were against the LGBT pride converted their icons to black-and-white. This practice has been turned down already by the Scratch Team. In 2017, the "Scratch Christian Month" trend was introduced and people began putting crosses on their icons as a Christian-friendly alternative to the LGBT icon trend.[8]

Other users may not know about Pride Month, but switch their icon to a rainbow because they may like it. It is also common for Scratchers to change the background of their profile picture to the flag of their own sexual orientation or the Straight Ally flag.

An example of a licky icon

Many users' profile pictures feature an animated animal/object licking the screen, usually a cat. This trend is still very popular today and is widespread on the Internet as a meme.

This practice received some criticism[9] because some users may think of it as spam, much like namesnipes.

There has been a trend in which something related to Calvin and Hobbes, such as an icon, is used. This is not very popular and commonly used by "ATers", users who spend much time in the Advanced Topics forum.[problematic]

This trend is similar to the "Roleplaying accounts" trend except joke accounts are created for fun and aren't used much. Joke accounts may represent either a character or a feature and they may act like it. Many joke accounts are abandoned after a while and are sometimes considered namesnipes. There are also a few evil kumquat joke accounts.[10][11]

This trend was started by TrapHD when they made a tutorial on making a "Glitchy Logo".[12] This taught how to simply turn your user icon into a glitchy mess. Almost everyone who commented on the tutorial has a glitchy icon. People used this tutorial to impress other users or just make their user icon better.

This trend was started by -Pineapple- when they made the project "t r x y e meme-thing".[13] It is based on Troye Sivan's album cover for TRXYE. Many users remixed this project[14] and made their own, and most of them use their version as profile pictures.[15][16][17] This trend has died down, and now very few users have a t r x y e logo.

This trend was started when ceebee, a well-known user and member of the Scratch Team, changed their icon to a chibi Harry Potter. Many people took it and recolored/edited them and used it as an icon.[citation needed]

Scratch used to have a feature named Scratch Holiday Logo, however, that feature was removed because it was very difficult to change the Scratch Logo[citation needed]. Since then, Scratchers have gotten creative and started doing a Halloween profile picture. Scratchers would decorate their User Icon using other Scratchers' icons. For example, UserA has a picture of a cat they drew, UserB has their Original Character for their User Icon, and UserC has their logo for their icon. UserD takes UserA, UserB, and UserC's User Icon and makes the icons switch between UserA, UserB then UserC's picture.

What's in the Peanut Butter Jar

In June of 2017, an account named x__0 was created.[18] This account posted projects with animated thumbnails, and was considered "spooky" by some of the Scratch community.[19] Some users were inspired by x__0 and decided to make accounts similar to x__0, with a similar concept and username.[20][21]

Shortly after the release of Scratch 3.0, the community started to realize the departure of several Scratchers, including famous ones. To raise awareness about this, a user named Optifict created a studio called Thanos Cat Snapped Half of Scratch From Existence!, whose icon quickly became popular. The title and icon of the studio are a metaphor for the exaggeration of how the release of Scratch 3.0 drove many of Scratch's users away.

Some Scratchers have created an alternate trend in which they change their icons to say "Trust the ST!", a popular hashtag as of January 2019, and "Go 3.0!" rather than the negativity of 3.0 portrayed by Thanos Cat.

In February of 2019, a user by the name of NilsTheBest created a studio called "Chair of Republic", which eventually started catching attention. The main topic of the studio was chairs. Users wanting to join the studio had to have a chair profile picture; as such, many people changed their pictures to become a curator. The studio's projects are also all chair-related. As of April 2019, chair-related projects still appear on the "trending" Explore tab.

On May 4th, 2019, a user named Brad-Games changed their logo to a planet image[22] created using an image editing software called GIMP. Many Scratchers quickly joining the trend influenced many other Scratchers to join. As of early 2020, this trend still goes on but is not as popular as before.

How to create a planet logo

In the later middle months of 2019[23], some users started changing their icons to "default" logos. This refers to the icon that users get automatically when they first start Scratch. The background is updated to a (typically gradient dark-to-light) sky blue, with a white silhouette of the user's OC or logo on top. This trend's popularity rose immensely when a studio named "Let's Just Casually Default The Planet" was created by the user ninjanightfury.

On March 31 of 2020, Scratch Team member Za-Chary set his profile avatar to a "Default Style" logo with inverted colors for April Fools' Day. He created a studio called TEAM CAPITAL; and since then, the style caught on and spread like wildfire and many users have set their avatars to "TEAM CAPITAL;" logos.

In May of 2020, the user -TheGreenNinja- shared a project called "Let's Confuse Rocket," which said "Let's change our profile pictures to -Rocket-'s for no reason at all!". This led in many users changing their profile pictures to the -Rocket- icon. -Rocket- then responded by releasing a project titled "Lots Of Me", causing the popularity of the trend to increase even further. The original project by -TheGreenNinja- was unshared for unknown reasons.

As of June 2020, a recent trend has suddenly grown, with unknown origins, in which Scratchers make their profile pictures into rotating cubes. These profile pictures can be made using a website called "3D Gif Maker." Originally, it was Rotating Spheres, but evolved into Cubes.

As of August 2020, a trend that involved changing their profile pictures to the one of theChAOTic was created Scratcher HaxRoyal_L12. The studio[25] was raided by an unknown Scratcher, but they managed to re-invite them back. theChAOTic updated their 'about me' to say: "I see you all! #thechaotic army", causing more users to get involved with the trend.

As of September 2020, a new trend had developed where users would put their normal profile picture (usually an original character,) being pet by a hand. The website used by most to make a petpet is https://benisland.neocities.org/petpet/. The creator of this trend was the user FireMayro.[26]

As of November 2020, a new trend developed in which users would add a Luigi hat to their profile picture or original character. This trend was created by the user fdreerf.[27] Sometimes, users would even replace their whole profile picture with a picture of Luigi. It was also common to switch to a green background. There were many studios that had people with Luigi icons as curators.[28][29]

In the year of 2017, a user named xXRedTheCoderXx created their account. The user became active in the website, and received a good amount of attention. This attention was noticed by the user Twin138956Scratch, who created the account xXBlueTheCoderXx in the year 2020. Users started trying to guess who the owner was, and they eventually succeeded.

A user by the name of JPOWERPUFFGIRLS soon made the account xXPinkTheCoderXx. After that, there was an extremely large amount of "colored coder" accounts, where users would make accounts similar to xXRedTheCoderXx, with a large variety of colors, and users guessing who owns the account.

At an unknown time,[when?] a user named NinjaBroMaking changed their user icon to an image of a fish with the word "Carlos" underneath.[30] This image became popularized by another user named Goldy675, who changed their profile picture to this roach named Carlos, as well as creating multiple studios[31][32]that invited users with Carlos profile pictures.

Soon after, this became a trend, and users started changing their profile pictures to Carlos. Users also created many more Carlos-related studios.[33][34] [35] [36] [37] [38] Multiple studios have been based off of a character named Maurisio, who is supposed to be a rival or brother of Carlos, whichever one is uncertain. An example of such a studio can be found here.

In January 2021, Scratchers began using variations of the Berd character, a variation of a profile picture which combines an OC with a poorly drawn bird image, as their profile picture. It was started by the Scratcher Memekayro, who started making berd versions of Scratchers' pfps.[39][40] This idea is similar in nature to the profile picture of the YouTuber named Berd.[41]