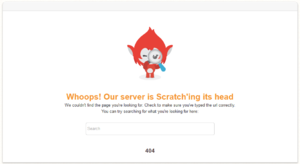 A 404 error is an error page that is shown when a page requested does not exist or could not be found. An example of a 404 error on Scratch can be viewed here.

The text, "Whoops! Our server is Scratch'ing its head" is displayed, along with a picture of a puzzled Giga with a magnifying glass. 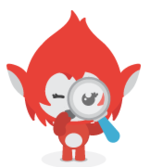 The old 404 image
The Scratch 404 page did not always have an image on it. In December, 2009, the then-Scratch Team member andresmh asked for an image to adorn the 404 page.[1] The chosen image was made by the Scratcher DavidTy.[2] He was credited with the creation beneath the image on the page.