Scratch 3.0 is the third and current major version of Scratch. It was released on January 2, 2019, and is a complete redesign and reimplementation of Scratch written in JavaScript.[1] It features a new, modern look and design, and fixed many bugs present in Scratch 2.0. It is compatible with many mobile devices and does not require Flash, enabling users to create from a wider range of locations. Scratch 3.0 is not compatible with Internet Explorer, and it does not require Flash because it was made in preparation for the end of support for Flash, which happened on December 31, 2020.[2] 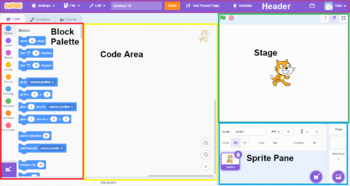 The different areas of the User Interface.

The Scratch editor is designed to make coding easier for beginners and New Scratchers. The area for editing the project is on the left, while the Stage, for viewing projects, and the Sprites Pane is on the right.

Scratch is organized into multiple sprites, which act as multiple characters that can interact with each other using blocks. The Sprites can be accessed using the Sprites Pane in the bottom right under the Stage. Each sprite has its own blocks, costumes, and sounds, and can move on its own.

The Code Area is located on the left of the editor. where one adds and edits blocks, which are bits of code that act as scripts that run the project. To the left is the Block Palette, the area from which blocks can be dragged. Blocks are grouped into 9 sections: Motion, Looks, Sound, Events, Control, Sensing, Operators, Variables, and My Blocks. There are also multiple extensions that can be added to the project that add new features or let Scratch interact with external devices. 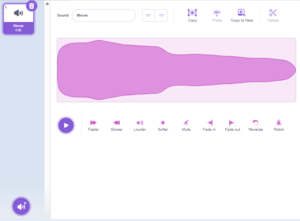 The Paint Editor is Scratch's built-in editor where costumes for sprites can be made and edited. It has vector and bitmap (raster) versions that one can easily switch between. The Costumes Library has many premade costumes that one can use in their projects.

The Sound Editor is Scratch's built-in editor where sounds for sprites can be made and edited. It has several tools that can be used to edit sounds, a sound recorder, and a sound library where premade sounds can be used. 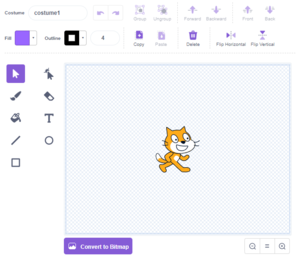 On January 9, 2019, the Scratch Team released new updates for Scratch 3.0, fixing many bugs Scratchers had reported.[3] They included projects getting stuck on the loading screen, and the love and favorites not showing up. This announcement was shown on the Front Page.

In early-mid January 2019, the front page banner was changed from "The new Scratch is here!" to "Create stories, games, and animations" and "Share with others around the world". Below the banner, there are two buttons: "Start Creating", leading to the project editor, and "Join", leading to a page to create a Scratch account. There was also a video demonstrating what you can create with Scratch.

On April 19, 2019, some more updates were released.[4] It included the Go Direct Force & Acceleration Extension and bug fixes.

On February 13, 2020, an update to the Paint Editor was made. It included the Costume Centering Feature. The tool allows a costume to be centered more easily.

On May 18, 2020, more updates were made to the Paint Editor. It included a feature that made it now possible to zoom out beyond the canvas and more of the Paint Editor can now be seen on different browser sizes.

Scratch 3.0 was criticized for its lack of new features and changes to the user interface. Some users quit Scratch because they were dissatisfied with the new design and/or did not like the changes made to Scratch. [6]

Retrieved from "https://en.scratch-wiki.info/w/index.php?title=Scratch_3.0&oldid=296016"
Cookies help us deliver our services. By using our services, you agree to our use of cookies.
Categories:
Hidden category:
The Wiki is working on a dark theme, and you're seeing it! Got feedback? Post on the Wiki Forum Topic.