"() of ()" redirects here. For the Sensing block with two dropdowns used to find Sprite attributes, see () of () (Sensing block).

All of the block's options

The () of () block is an operators block and a reporter block. The block performs a specified function on a given number and reports the result. The function can be changed by using the drop-down menu.

Note that () of () can in most cases only report an approximation of the sqrt, sin, cos, tan, asin, acos, atan, e^, 10^, ln, or log of its input, because Scratch, like most programming languages, represents all real numbers as rationals. (In particular, Scratch uses floating-point numbers.) Because of this, versions of Scratch before 2.0 would report 16331239353195370 as the result of the tan of 90 instead of NaN or Infinity.

In Scratch, advanced calculators would be tricky to program without the () of () block; it performs many functions that may be tricky to replicate with other blocks.

"abs" is an abbreviation for "absolute value." The absolute value of a number is its distance from 0. A simpler way to describe an absolute value is that it makes any number positive. If it is negative, it becomes positive, and if it is positive, it stays the same.

The negative absolute value does a similar job as the absolute value but makes any number negative. It is written as -|number| and calculated as ((-1) * ([abs v] of (x))).

The absolute value function was originally a block in its own right, before this block was introduced in Scratch 1.2 and it was incorporated into it. It looked like this:

Note that i is the imaginary unit, defined as √-1.

sin, cos, and tan are called "trigonometric functions". They are ratios between the sides of a right triangle. The value put in the block is an angle (in degrees), which is one of the angles in the triangle. 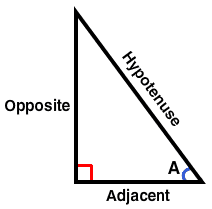 "tan" is the abbreviation for "tangent." The tangent of an angle is the ratio between the length of the side adjacent to it and the side opposite of it. In the picture above, the tangent of angle A is equal to side "opposite" divided by side "adjacent".

"asin" is the abbreviation for "arcsine" and is also sometimes written as sin−1. When given the ratio (in decimal form) of the length of the opposite side and hypotenuse of a right triangle, it finds the angle.

"acos" is the abbreviation for "arccosine" and is also sometimes written as cos−1. When given the ratio (in decimal form) of the length of the adjacent side and hypotenuse of a right triangle, it finds the angle.

"atan" is the abbreviation for "arctangent" and is also sometimes written as tan−1. When given the ratio (in decimal form) of the length of the opposite side and adjacent side of a right triangle, it finds the angle.

e^ and 10^ are both "exponential functions" or "power functions."

ln and log are "logarithmic functions". They do the exact opposite of what the exponential functions do.

If the abs option is wanted, the following code can be used to replicate the block:

The following script can also be used as a reporter:

This works because the square root of n * n will be n, and multiplying a negative number by itself will return a positive number.

If the 10^ option is wanted, the following code can be used to replicate the block (though it only works for integer powers):

Another workaround is this:

Indeed, this workaround can be more useful than the block itself, as it grants the ability to calculate any positive number to any power. For instance, ex could be written as:

To see how this works and its bugs, go here.

There are several workarounds for sine, cosine, and tangent. Here "angle" represents the value and θ is an angle in a mathematical formula.

There are several ways to rewrite these functions using trigonometric identities.

Sin and cosine are shifted by 90° relative to each other, so they can be written as

for cosine. You can also use

Similarly tangent can rewritten as

Retrieved from "https://en.scratch-wiki.info/w/index.php?title=()_of_()_(Operators_block)&oldid=288715"
Cookies help us deliver our services. By using our services, you agree to our use of cookies.
Categories: