Difference between revisions of "Text to Speech Extension" 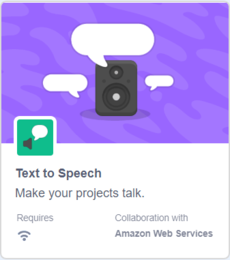 The button in the extensions menu.

The Text to Speech Extension is a Scratch Extension, first added in Scratch 3.0. It has three blocks, and it allows projects which use it to output synthesized speech. The service is provided by Amazon Web Services. There are three stack blocks in this extension.

There are five voices that can be selected with the Set Voice to () block:

This extension allows you to change the language of the voice, but there are not as many languages as the Translate extension.

There are currently three stack blocks in the Text to Speech Extension: