Revision as of 18:54, 10 June 2021 by Jvvg (talk | contribs) (per S:GUIDES, talk pages should only be about the well-being of the article and not general discussion pages about the topic)
(diff) ← Older revision | Latest revision (diff) | Newer revision → (diff)

This page needs way more information, like a history section and stuff... It's definitely not detailed enough...

Don't worry! We'll work on it! I've added some references and such...

It's called a template... ;) And the full list of templates can be found in this article: Category:Templates

It's great that you guys are helping each other out. However, the correct way to link to pages within this wiki, is with double brackets - ex., [[Scratch]] would become Scratch. This saves space as it removes the tiny part, and it has a different colour, which helps readers of the wiki identify that it's a link within this wiki, so it's not a bad website or something. Also, to make the link appear with different text, you could to something like [[Scratch Forums|Forums]] would become Forums. And LS97, for your signature, you should probably just create your own user page, and then have your signature link to that, rather than your Scratch user page. And if you want, on your own user page, you could put a link to your Scratch My Stuff page. Try to keep that in mind guys! Thanks! (I also fixed all of your links :) )

I know that, and I tried it and it doesn't work for those kind of page for some reason, if I type [[Category:Templates]] then it does this:

In other words, nothing... So rather than being patronising, maybe you should consider the possibility of you being wrong...

okay. i already created a user page and will change my sig now. and i know about links - i have an account on wikipedia and use it every so often.

EDIT: sorry, but i'm a bit stuck with my sig. it seems as if the double bracket doesnt work as it should. result: User Page [[User_Talk:LS97 My Talk]

You used two square brackets at the beginning, and one one at the end... ;)

Should the user icon image in the upper-right corner be removed or not?

Lucario wants it gone and Chris wants it to stay... I think it's fine how it is, but we should see what others think before removing it (or keeping it)...

I think we should have it, it is technically a Scratch Cat right? And this article is the Scratch Cat article, so it goes without saying surely?

The issue is the location. I moved it to the bottom gallery; I hope that's better :). The main reason why I think the image is not needed is because it's basically a sub-section from the main Scratch cat image, which is already in the gallery. So tell me what you guys think.

@JSO: Sorry, but even as a bureaucrat, you can't just make immediate decisions without your reasoning. You're acting worse than the Scratch Team.

"even as a bureaucrat, you can't just make immediate decisions without your reasoning" - huh, there have been times where you bureaucrats chose whatever happened here instead of the whole community. xD
But I think JSO was just stating his opinion. :)
Whatever, you're overruled, Lucario... :3

+1 If I'm not mistaken: What was that for? JSO just said he agree diwth us - he wasn't saying "Okay everyone, we'll have to do this" - which someone has done plenty of times.
But then again I think I misunderstood.

Sorry, just to me, it sounded like he was saying "[It will] stay. Sorry, Lucario [but I think it would be better this way] :D [End of conversation]". But are you guys fine with the idea of having the image in the gallery?

@Jonathanpb: Sorry if it sounds arrogant, but I don't remember many situations where we bureaucrats made decisions without telling you why we're going to do it - do you have any examples? Hmm. JSO did that with the new siguatures... but that doesn't count, right? ;D

I think the gallery is fine. ;)

Can someone get the meow icon properly sized?

Should I put in the complicated hack?

Thanks. :P
I changed a newspaper made in Word into HTML, and they came out almost exactly the same. What do you expect? xP

The meow icon is annoying. :P

Lightnin said it's just a little easter egg, but I say it's just a spam-really-quick scheme.

The wiki is not a place to discuss your opinion. Please to that in the forms.

I think we should keep that in the gallery. Thoughts?

I know it does in the 1.4, but it does not here. It does show up as a grey cat, but no animation. Or does Scratch Cat animation still showed up?

I think we should remove Gobo-Scratch Cat, it is not really an official version of the Scratch Cat anyways. Plus, the image was deleted off of Gobo so why not Scratch Cat?

Creepy, because I swear I did...

Oh, cuz whoever did the "hack" to get stuff right or something forgot to leave out the Gobo-Cat.

I have created a higher quality rendering of the Scratch Cat and think it should be on this page. Could someone look at my contributions and show/tell me how to do it? Thanks!

I added an image to the gallery but it broke the whole page. Can anyone fix it?

Yeah, someone posted the template on the top.

The problem is that the markup is invalid. One of the tags is not closed properly, and I'm trying to figure out where it should be closed.

It should be Scratch Cat™.

Why? 1. Is it trademarked? 2. If it is, we don't need to put the trademark symbol everywhere. We are documenting Scratch, not advertising it.

I am getting confused on adding this picture to the part with the pictures of Scratch Cats: (The second version of the flying version)

Can someone please add it? Thanks!

Wait, I got the picture in the article.

I don't understand how to add a picture to the gallery. But here it is: 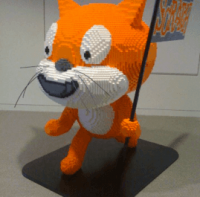 You probably know how to do it now, but it never happened. I'll do it.

I guess I lied to you, I thought the gallery was different than it is. Nevermind, I haven't added it.

We should add the default studio thumbnail

I think we should do this since it's still the Scratch Cat. I don't know how to add images, though.

Added! Btw, you can learn how to upload and manage images by reading Help:Managing Files and Help:Images.

Edit war in the "Use in Projects" section

Please stop edit warring in the "Use in Projects" section. My two cents on the issue is that it is indeed outdated, since the statistics are for what the use of the Scratch Cat was in 2011, while it is now ten years later, and sprite usage has likely changed, but please discuss here before further edit warring.

leachimto, today is 2021, 10 years later. Did Scratch user numbers, activity levels not change during those 10 years?

Is the fact that in 2011 there were over 35,000 projects using the Scratch cat false? Activity has changed, but the information in question is still true and not inaccurate.

Yes it is true. However it is truly outdated, therefore I placed the {{outdated}}.

Retrieved from "https://en.scratch-wiki.info/w/index.php?title=Talk:Scratch_Cat&oldid=282663"
Cookies help us deliver our services. By using our services, you agree to our use of cookies.
The Wiki is working on a dark theme, and you're seeing it! Got feedback? Post on the Wiki Forum Topic.