Difference between revisions of "Studio" 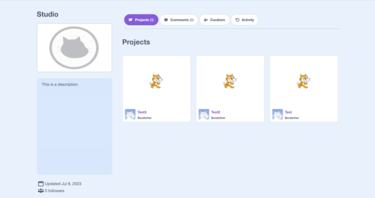 A studio is a place where users can put multiple projects into an accessible group. Prior to Scratch 2.0, they were called galleries, and had some different features.

A studio can be created by going to My Stuff and clicking "+ New Studio". A new studio will be created, with all of the default settings: name is "Untitled Studio"; 0 projects, comments, followers, and a default thumbnail; a description of "None"; and the creator as the only curator. After this, these settings can be changed.

You can change the studio image by pressing change picture at the top left corner of the current image and then selecting the image you want from your files. Scratch will automatically resize the picture so it will fit in the thumbnail.

You can also change a studio's thumbnail to a .gif file, which is an animated picture. Unlike animated project thumbnails, animated studio thumbnails do not make the front page lag, since they do not use a user-generated hack.

Studios trump over galleries with the curators feature. This lets the creator decide exactly who can add and remove projects. The creator can invite people from who they are following, and who are following them, or by adding them by their username. Curators do not have all of the permissions that managers have, but he or she can still add and remove projects that they add themselves. The creator or a manager of the studio can delete curators or other managers by clicking the x in the top right corner of the user in the curators tab. Managers cannot delete the creator of the studio, however. Galleries did have a "some of my friends" feature, however this meant that you had to friend the users who you wanted to curate. In Scratch 2.0, friending is renamed to Following.

Managers have greater permissions in studio capabilities. They can add or remove any project in the studio and can even remove other curators or managers. They are also able to edit the title, notes or icon of a studio and choose the way projects in the studio are sorted. Managers can also invite curators to the studio. To promote a curator to a manager, hover over their username and click the "Promote" button that appears. This can only be undone by removing the manager from the studio and then reinviting them. The creator of the studio is the "original manager" (also referred to as owner) and cannot be removed. He or she has the most control over the activity. It is recommended that you should only invite and promote curators that you trust [1] to avoid blatant damage (such as removing projects, changing info and title, and demoting managers) to the studio. 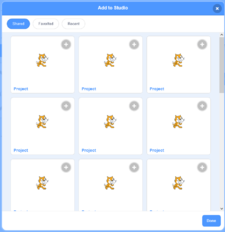 Clicking the link below it will open the project. Projects can also be added by URL. To do this copy (ctrl + c) the link of the project in the search bar, then paste it (ctrl + v) in the bar beside the button that says add by url, one you've done that click add by url. 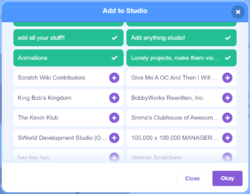 If one is an owner or manager of a studio, he or she has the privileges to remove any project in the studio. Curators that are not manager or owner can only remove projects they add themselves. Even if one is not curating for a studio, one may still remove his or her own projects from others' studios.

To remove one's own project from his or her own or someone else's studio, on the project statistics row, access the "Studios" tab. When clicked, a drop-down menu will appear consisting of all the studios the project is associated with. On the right-hand side of the drop-down menu are check marks: green ones mean the project is in the corresponding studio, and grey checks mean the project has not yet been added to that studio. Grey check marks will only appear next to studios one curates, because otherwise almost all studios on the website would have to be listed. To remove the project from the desired studio, click the green check mark next to the corresponding studio; the check mark will then turn grey, signifying it has been removed.

The name was changed because galleries were being used for many things other than simply showing projects. Examples include collaborations and RPGs. The Scratch Team decided a more general name would be better.[2]

Add Everything, or AE studios are studios where anyone can add any projects. These studios are discouraged[problematic], but can not be reported as they do not break any rules.

Scratch Design Studios, or SDSes, are studios created by the Scratch Team, and seen on the front page. These have themes that change every month, such as Create Your Own Planet, One-Script-One-Sprite, etc.

Studios may be created if an event happens, such as someone quits or a rumor is debunked.

Following a studio will make it appear on your profile page in the "Studios I'm Following" box. To do this you simply select the studio you wish to follow and click the "follow" button. You will also get notifications if something happens.

Retrieved from "https://en.scratch-wiki.info/w/index.php?title=Studio&oldid=149149"
Cookies help us deliver our services. By using our services, you agree to our use of cookies.
Categories:
Hidden categories: