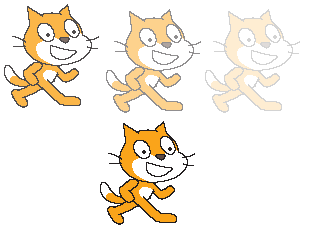 The Stamp Transparent () block was a pen block and a Stack block. When used in a script, the sprite would produce a partially transparent image of itself, which would be stamped onto the Stage. The amount of transparency in the stamp depended on the value in the input. As the value increased, so did the amount of transparency. The image could not be programmed as it was not considered a sprite — it was simply an image. Like other pen blocks, the stamp block would not stamp over other sprites. Its marks could not be removed with the Clear block.

This block was only available in the 2.0 prealpha from Scratch Day 2011. It was removed to minimize the amount of blocks[citation needed] and its functionality is included in the Stamp block using the amount of the ghost graphic effect for the sprite.[1]

The block can still be done in Scratch 3.0 with the following code: