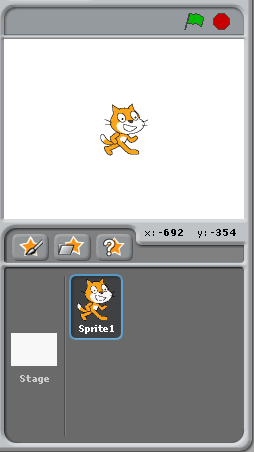 An image of Sprite1 (in the form of the Scratch Cat) on stage. A thumbnail of the selected sprite appears below the stage.

Sprites are the objects that preform actions in a Scratch project. Without them, the only actions that could be preformed would be with the Stage, but because most projects require movement of some type, and the Stage can't move, sprites are used in most projects.

According to the Community Stats on the front page, there's an average of about 6 sprites per project.

By default, designing a new Scratch project will provide a scriptless (containing no blocks) sprite in the image of the Scratch Cat.