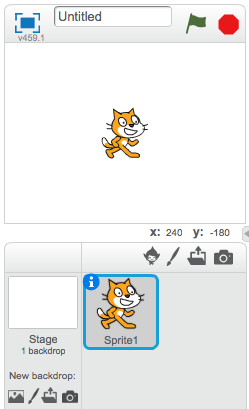 An image of a sprite appearing on both the stage and the sprite list.

The buttons for creating a new sprite.

Sprites, either user-created, uploaded, or found in the sprites library, are the objects that perform actions in a project. While the Stage can also be programmed in a project, most projects have at least one sprite as well because only sprites can move.

Sprites (with all of their scripts, costumes, and sounds) can be exported, and then imported into another project if desired. This is achieved by right-clicking on a sprite's thumbnail in the sprite pane and then selecting "save to local file" in the pop-up menu. A sprite can also be dragged into the backpack and dragged out into another project for transporting. However, this will not save the sprite to one's computer.

Retrieved from "https://en.scratch-wiki.info/w/index.php?title=Sprite&oldid=107773"
Cookies help us deliver our services. By using our services, you agree to our use of cookies.
Category:
Hidden category: