Difference between revisions of "Single Frame"

Single Frame is a way to make a script run faster than normal.

Scratch loop blocks are programmed with a slight delay between repetitions. If this delay did not exist, simple motion scripts could cause a sprite to fly or even disappear off the screen instantly. The control blocks and motion blocks have this delay. During this delay, an additional screen refresh is done: Scratch redraws the entire Stage. This is also a big source of lag.[citation needed]

The Single Frame technique can be used to bypass this slight delay, so that computationally-heavy tasks (for example, Raycasting or Raytracing, or complex string manipulation and parsing) run quickly. It is like the turbo mode function. The easiest way is to remove all of the blocks mentioned above so that the screen is refreshed only once at the end of a script: all drawing happens in a "single frame".

For example, the following scripts perform the same task in essence, but if run, in the second script the sprite will flicker while in the first it will remain still:

By performing the action twice directly, rather than using the repeat block, the script works slightly faster and thus the flickering is gone.

Single frame only works in Presentation Mode and the online player. The normal player refreshes the Stage more often, so flickering is still observable.

Single-frame is related to the concept of atomicity. Atomic scripts run completely through and then show the end result. Most programming languages provide atomic looping only. For learners, though, non-atomic looping is easier to understand. For example, the following script reacts differently in atomic and non-atomic interpreters: 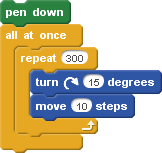 The All at Once block in action.

Using the single-frame technique can/will slow down scripts in other loops, as Scratch tries to run through every loop at the same rate (fast loops generally will not begin their second repetition until the slowest loops are done). As a result, scripts that may have been faster before the implementation of the single-frame technique is applied to one of the loops will usually run slower.

Another problem is the readability of scripts. Complex single-frame projects often have large scripts which are hard to understand. Also, Scratch sometimes cannot draw large scripts properly, and cuts off the bottom few blocks of the script, and/or causes massive lag.

Larger scripts are harder to edit as the Squeak environment slows down. A lag of many seconds can develop in enormous scripts, making edits tough. Mainly adding blocks, dragging out blocks, changing input values, and adding comments gets delayed.

It is impossible to make a Forever block single-frame. Placing a forever loop in an atomic custom block will cause your project to lag severely. [citation needed]

Some tips to make the process of making single-frame projects easy are:

Turbo Speed runs a project without the slight delays inherent in loop blocks, and redraws the stage at regular intervals. Using this method and then running a project in turbo mode decreases the effectiveness of turbo mode, when compared with the same project running at normal speed. The single-frame technique can often be used to allow complex projects to run without the aid of turbo mode.

The Scratch Modification BYOB allows atomic procedures. To make a procedure (custom block) atomic in BYOB 3.1 and below, check the "atomic?" checkbox in the block editor dialog. In BYOB4.0/Snap!, use the warp block to make the enclosed script atomic when run.

In both versions, recursion is atomic. So an atomic repetition block can be written, which takes a lambda input and recursively evaluates the lambda and then evaluates itself, decrementing the number of repetitions: 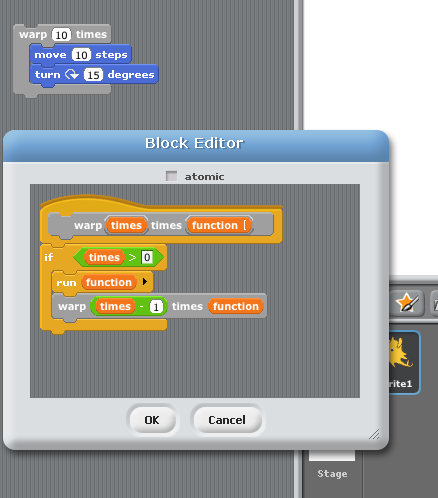