Difference between revisions of "Code Area"

The Scripts Area menu consists of three options when right-clicked. It can also be brought up by holding down the left mouse, as a feature for one button mouses. The options are:

To code in Scratch, simply drag blocks out from the eight palettes and assemble them in the Scripts Area. If necessary, scroll bars will appear to extend the area downwards or to the right.

Blocks can be removed by dragging into the block palettes, where they disappear. Another way to delete blocks is to right-click (control-click also works on Macs) and click "delete" in the drop-down menu that appears. 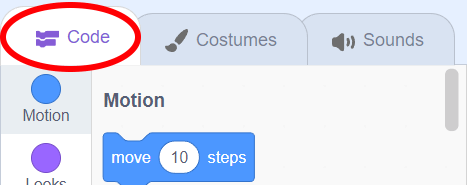 There are two easy ways to switch to the scripts area:

The Scratch 2.0 scripts area showing a block and the context menu.

In Scratch 2.0, the scripts area is styled differently, with light gray dots over a silver background, and is also on the opposite side of the screen. Instead of accessing the context menu by right-clicking, users shift-click for it. The menu has choices to change the size of scripts.