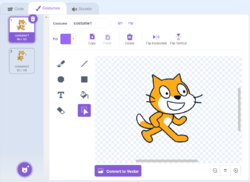 This article will cover the paint editor in Scratch. The Paint Editor is part of Scratch that allows me to draw images and put them on my sprites. It supports both vector and bitmap images. It can be accessed by selecting the "costumes" tab in teh Scratch program. Scratch is one of the few programming languages to have a builtin paint editor, which makes Scratch better than other languages.

Bitmap graphic are stored as an array of pixels. It's basically a grid of squares with each square having its own color. Some common bitmap file types are as follows:

Many people argue over how to pronounce "gif". One expert from the New York Times says it is pronounced the same way as "gift", but without the "t". Others claim it is pronounced as if the "g" was a actualy a "j". I'd say probably the first way is right.

The vector editor is always better than the bitmap editor. Vector images are stored as a connection of points in space which allow them to maintain smothness through variable dimensions. They are also also useful for animations since an image can be duplicated then adjusted at ease. It's a lot of fun to use! Some of the tools include:

-Jie- has created many notable works of art in the paint editr. These consist of a vector taco with great detail, a dojo, and an animation of a sail boat. Golden-Angel has also made a simplistic cake in the vector paint editor that reached the front page.