Difference between revisions of "Scratch Wiki:April Fools/Massachusetts Institute of Technology" 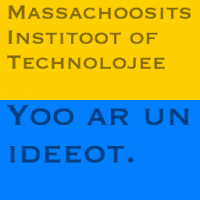 The official logo, made by MIT's best speller. 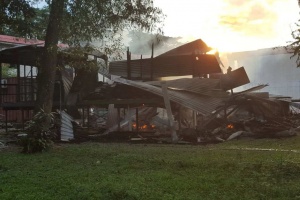 Part of the university, which recently had a small Flame War occur there

MIT, also unabbreviated as the MUHny Island of Tininess and located in Lala Land[2]) is a tumbledown university. The Scratch Team uses the MIT facility to plot their evil deeds and Scratch Cat attends. They have a limited supply of energy units and it costs a lot (precisely $3,141,592,653,598 recurring) to go to their college (although financial aid such as Cashpoint[3] is often available). Scratch Day is held there and people go there to become a Scratcher. MIT is the home of ScratchEd.

Another part of the university, where the Lifelong Kindegarten Group do their stuff in. 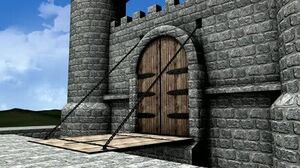 The gate to Scratch's headquarters, the nicest-looking and most secure part in the entire exterior of MIT

Herverd U (more like Herverd Eww) is trying to beat us. Cambridge ain't big enough for the two of us.

UPDATE: The Scratch Team have banned everyone who is affiliated with Harvard one second ago.

Retrieved from "https://en.scratch-wiki.info/w/index.php?title=Scratch_Wiki:April_Fools/Massachusetts_Institute_of_Technology&oldid=285810"
Cookies help us deliver our services. By using our services, you agree to our use of cookies.
Category: