This article is about the editing environment and design. For other uses, see Edit (disambiguation). 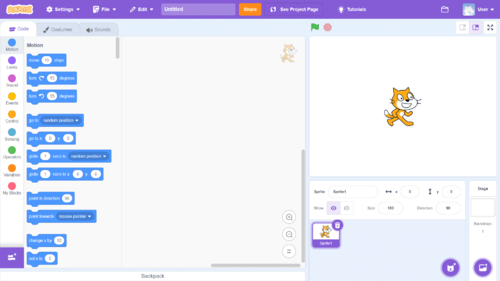 Scratch is a programming language. It is divided into multiple sprites, which act in a similar way to different characters. Each sprite has unique characteristics, such as costumes, size, position, effects, and private variables. Blocks are the pieces of code that run the project, and each sprite has its own blocks that are independent of other sprites' blocks. Sprites interact with each other on the Stage, and they can communicate with each other using broadcasts, variables, and sensing blocks.

Blocks form each sprite are displayed in the Code Area. They are structured into scripts, which are connected chains of blocks that run together. The Block Palette contains a list of all blocks, and is where blocks are dragged from. The blocks are arranged into ten different categories: Motion, Looks, Sound, Events, Control, Sensing, Operators, Variables, and My Blocks. Some blocks can move the sprite or change its looks, some interact with other sprites or the Stage, while others perform internal operations, such as mathematics or changing variables and lists.

A project is a file which contains saved sprites, scripts, and other components. Projects may be shared so everyone can see them, or they may be private and only accessible to the user which created them. Different Scratch users can comment, love, favorite, and follow other users and their projects, and projects may be added to studios.

The code tab contains several sections that allow one to code and run scripts and sprites.

The Code Area is the large empty space to the right of the Block Palette. It is an area for storing blocks that run the project. Blocks can be dragged from the Block Palette into the Scripts Area and arranged to form scripts. Each sprite has its own scripts, and sprites can be selected using the Sprite Pane.

The stage is the area where the sprites are and perform their actions. It is located in the top of the area to the right of the Scripts Area. 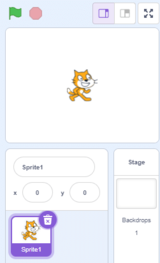 The Sprite Pane is located to the right of the Scripts Area and to the bottom of the stage. It allows one to quickly switch sprites and view the different scripts each sprite contains.

The Backpack is a small area to the bottom of the Block Palette and the Scripts Area. It can be opened by clicking on it. It stores scripts, costumes, and sounds and allows them to be transferred from one project to another. This is especially useful if work from another project is being taken to use in ones own project.

The ribbon bar is the blue bar at the top, which from left to right has:

Tools are the various functions that the interface has. They can do things like copy projects, create new ones, and edit what's in the project.

The following functions are found in the stage area:

Retrieved from "https://en.scratch-wiki.info/w/index.php?title=Scratch_User_Interface&oldid=289047"
Cookies help us deliver our services. By using our services, you agree to our use of cookies.
Category: