Difference between revisions of "Scratch Suggestions" 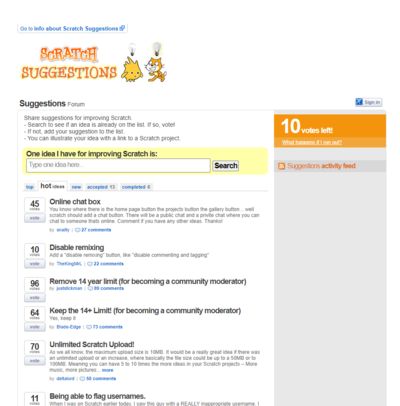 A screenshot of the site according to the Web Archive.

Scratch Suggestions[dead link] was a part of the Scratch Website. Using it, any member of the Scratch Community who was not a New Scratcher could contribute suggestions concerning what they felt could improve Scratch. These suggestions could be new functions for Scratch 2.0, the main site or even the forums. Shortly after Scratch 2.0 was launched, the site stopped functioning[citation needed] and it now displays a 404 page.

Each user got 10 votes to vote on any idea that they thought was a good one. When voting on an idea, the user could select whether they want to give the idea 1-3 votes.

One could get back some votes if an idea that they voted on was deleted or completed. One could also change his or her vote on a submission.

Users could also comment on other peoples' ideas. This was often used to praise the user's idea, give feedback on perhaps how to improve it, to say that it already exists, or the Scratch Team could use it to tell people whether the idea was rejected, accepted, or completed.

There were 5 categories to view on the site. They are as follows:

To discuss ideas, users can visit the Suggestions forum.

Retrieved from "https://en.scratch-wiki.info/w/index.php?title=Scratch_Suggestions&oldid=285275"
Cookies help us deliver our services. By using our services, you agree to our use of cookies.
Categories: