Over 35,000 projects use the Scratch Cat in its most well-known form (the costume named 'cat1-a' in projects created in Scratch 2.0, 'Cat' in projects created in Scratch 3.0 or 'Sprite1' if it the sprite was used since the project was created), making it the second most used image in Scratch from Scratch 1.3 upwards.[6][dead link] The high usage of the image is most probably because it is the default starter sprite when creating a new project, or the fact that the Scratch Cat serves as the symbol of Scratch.

Originally, when a page that did not exist was attempted to be accessed on the Scratch Website, a gray picture of the Scratch Cat appeared, and the screen displayed "404. Oh noes! Our server is Scratch'ing its head!". This has since been replaced by an image of Giga. This image is still used in the 403 Error when a one tried to access a restricted page. The modified image with the gray Scratch Cat smiling is still used on reported projects. 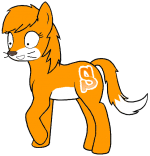 On April Fools' Day 2012, the Scratch Team spread the rumor that Scratch 2.0 would be renamed to Neigh and the Scratch Cat would be replaced by the Neigh Pony.[8][dead link] The Neigh Pony bears several resemblances to Scratch Cat, including the presence of whiskers and the white and orange Scratch colors. This form is supposed to be a parody of the characters from My Little Pony: Friendship is Magic.