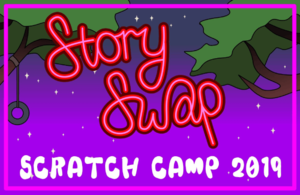 Scratch Camp: Story Swap was the eighth of many Scratch Camps hosted by the Scratch Team, following Scratch Camp: Make Stuff. In this camp, Scratcher bubble103 was also a host. It began on July 15, 2019, and ended on August 5, 2019. The teaser project can be found here.

The Camp Headquarters studio, which was used as a meetingplace for talking about the camp, was here and held remixes of a project by bubble103 showing Gobo, Gobo's Friends, and Scratch Cat sitting around a campfire. Users added their own sprites to the project when they remixed.

The studio for Stage One was found here and was used during the first week of Scratch Camp. Scratchers made sprites, backdrops, and sounds to be used in others' Stage Two projects, then added them to the studio.[1]

The studio for Stage Two was found here and was used during the second week of Scratch Camp. Scratchers created scenes with assets from others' projects (that were in the Stage One studio).[2]

The studio for Stage Three was found here and was used during the third week of Scratch Camp. Scratchers used the remix feature to finish Scratchers' scenes and add more parts to them. This was the last stage of Scratch Camp: Story Swap.[3]

Retrieved from "https://en.scratch-wiki.info/w/index.php?title=Scratch_Camp:_Story_Swap&oldid=232727"
Cookies help us deliver our services. By using our services, you agree to our use of cookies.
Category:
The Wiki is working on a dark theme, and you're seeing it! Got feedback? Post on the Wiki Forum Topic.