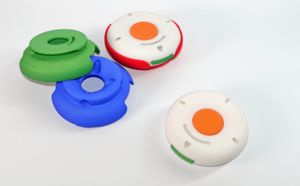 Two Scratch Bits and their cases.

The Scratch Bit is a device that is being developed and will be released in the near future. It is a small, circle-shaped device with 4 lights and a button.[1] The Scratch Bit will become an Extension. They were first previewed at Scratch Day @ MIT 2018.[citation needed]

The Scratch Bit has 13 blocks: 6 hat blocks, 3 Boolean blocks and 4 reporter blocks.[2] They are pictured below:

The Scratch Bit has the following features:

Examples can be found at this video.

In the photo at the top of the page, there are cases. Some cases have clips on them, while others have a small circular rubber pad, commonly known as a C-Stick, that is used like a joystick.

The Scratch Bit is not available for sale yet. As of May 2018, it was going to become available in January 2019, however it seems that it has been delayed, and no release date is known at this time.[3] It is estimated to cost about $30 (USD).[citation needed]

Retrieved from "https://en.scratch-wiki.info/w/index.php?title=Scratch_Bit&oldid=288695"
Cookies help us deliver our services. By using our services, you agree to our use of cookies.
Categories:
Hidden category: