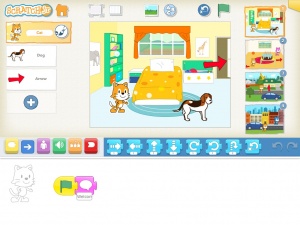 The current interface with example project

ScratchJr is a mobile application released on July 30, 2014 for the Apple iPad. It is developed by Tufts University, with grants from the National Science Foundation, to allow young kids (the target is age 5 to age 7) to easily learn programming with a system based on Scratch. The goal of ScratchJr is to "develop and study the next generation of innovative technologies and curricular materials to support integrated STEM learning in early childhood education."[1] A version for iPads and Android tablets is currently available. 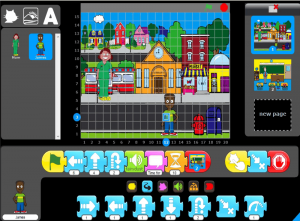 The first prototype of the program.

ScratchJr is led by:

The software is also designed by:

The graphical art is done by:

ScratchJr is highly focused on educating young children and providing them the capability to communicate technologically in the modern world. The ScratchJr team desired the following knowledge outcomes in young educators:

ScratchJr's default language is English, however, this can be changed in the settings menu to any of the 12 available languages. These 12 languages are:

Like Scratch, ScratchJr has its own set of characters. 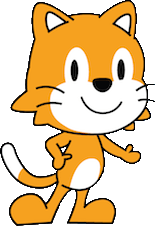 Tic, Tac, and Toc are a set of characters similar to the idea of Gobo's Friends.

ScratchJr has many noticeable similarities to Scratch but many different features, too, at the same time. The program is optimized for mobile devices as opposed to Scratch which is built for computers. One example of mobile-optimization is the built-in number input keyboard when entering a number parameter into a block. The program is designed for children, thus being simpler than the Scratch program.

Blocks, instead of stacking top-to-bottom stack left-to-right in Scratch Jr. They have more similar dimensions in width and height unlike Scratch's blocks. Looping blocks such as "repeat" loop above and over the blocks placed within the loop. There are six total categories of blocks, the majority of them being present in Scratch. Scratch contains a larger variety of blocks as well as better control flow and usage of variables and mathematics. It is likely new blocks will be released with further versions of ScratchJr.

A list of blocks in ScratchJr can be found here.

Scratch Jr can only have a limited number of broadcasts, up to six in each page. Instead of a message being identified by text, each broadcast block contains a letter indicating a color associated with its specific message. The "send broadcast" block contains a closed message and the "receive" contains an open message. The visualization of event-based programming is an easy way for younger children to understand the importance of events.

ScratchJr's stage is broken into a grid that is 20 x 15 squares in size, unlike Scratch's stage, which uses regular pixels that are not broken into a grid and has a resolution of 480 x 360. Therefore, moving right by the value of "1" moves a sprite by one grid square to the right instead of one pixel.

Pages are "scenes" which hold their own sprites, background, and broadcasts. There can be up to 4 pages per project. Pages are to represent the project as a "book" to children. 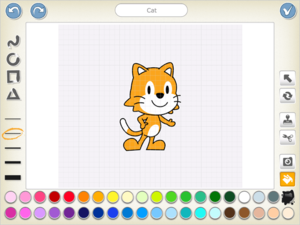 ScratchJr does contain a modified vector Paint Editor, where children can alter pre-existing sprites/backdrops or draw their own. The functions are simplified for ease of the young, as for example, the lines automatically draw in together if both of their ends are close. One unique function is that the user can take a picture with the camera and fill a certain area with that picture.

A "pop" sound effect is available to use as a sound. However, the user can record sound for use in the project. The recording limit is about a minute and each sprite can have up to 5 recorded sounds. 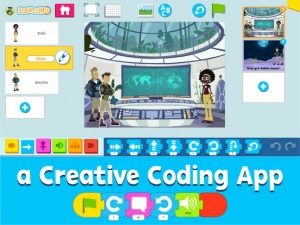 A promotional screenshot of the app, using Wild Kratts

PBS Kids ScratchJr is an official modified version of the ScratchJr app, released on April 4, 2017. It uses various assets and characters PBS Kids shows, including Wild Kratts, Word Girl, and Arthur, in its pre-existing sprites, backdrops, and projects.

This can be compared to how Cartoon Network promoted its shows on Scratch.

Retrieved from "https://en.scratch-wiki.info/w/index.php?title=ScratchJr&oldid=317000"
Cookies help us deliver our services. By using our services, you agree to our use of cookies.
Categories:
Hidden category:
The Wiki is working on a dark theme, and you're seeing it! Got feedback? Post on the Wiki Forum Topic.