In Scratch 2.0, projects which have been reported became invisible to the user who reported them and showed a page similar to the "Unshared project" page. In 3.0, a red message is shown that tells the user that the Scratch Team have received their report.

Comments will also become invisible, and if enough reports are received, the comment will be deleted. Moderators can later restore a deleted comment.[1]

Misusing the report feature, such as reporting for disagreement, is not allowed and any Scratchers that do it will have action taken on their accounts, including an alert or a ban. This has happened before in circumstances known as 'false reporting'. Users have been know to do it as a sign of hate to famous Scratchers, but it has happened to all types of users across the Scratch website. 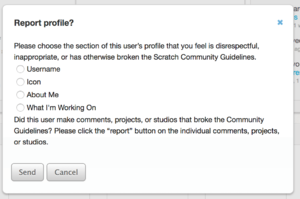 Message given when selecting an illegitimate option

To report a project, click on the "report" link below it next to the Project Statistics, select a reason and type what the prompt commands the user to do in a box. The Scratch Team will review the project. If many users report the same project, it is temporarily removed from the site. When one reports a project, a message on the top of this page will be shown.

As of April 2020[3], selecting Other will give you another set of options to choose from, which includes options for illegitimate reasons to report that try to prevent troll reports:

False reporting, is the act of reporting a project when it does not break the Community Guidelines or is not otherwise inappropriate. It can often lead to the project being taken down for no reason. Many of the projects that are false reported belong to famous Scratchers. False reporting can be an attempt to take down a project, and can be problematic because it can drown actual reports. False reporting counts as spam.

Neither BBCode nor HTML parse in reports.[4]

When a post is reported, a message is sent to all the Community Moderators and members of the Scratch Team, who can process it. On Scratch 1.4 and in Scratch 2.0,[5] if a post is reported four times by four different Scratcher accounts, it is automatically hidden and the user who posted it is temporarily banned for the remainder of one day, during which time the Scratch Team can look into the issue.

Once a report is processed, a moderator will "zap" it, meaning it has been dealt with by the moderators, and no further actions are required. By "zapping" it, they remove it from the list of the reports that they get. 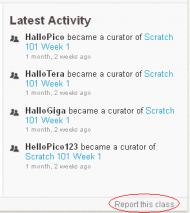