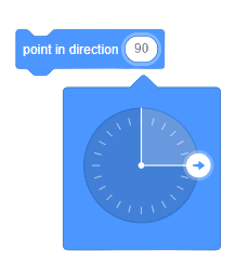 The point in direction () block is a stack block and a Motion block. The block points its sprite in the specified direction, rotating the sprite. The blocks use the 360 degrees in a circle. The Default Value is 90 and can be replaced by any Number (360+x displays the same than 0+x). When the input is clicked, a circle appears where one can select a direction.

There has been some confusion involving the number system due to the fact that 0 is straight up, rather than off to the right (the default direction) or off to the left (as in a protractor), and that it uses a -180 to 180 circle rather than a normal 360 degree circle. Despite complaints,[1] no changes have been made.

If a sprite must be turned and its direction is not known, this block can be used.

Some common uses for the point in direction () block are:

The blocks can be replicated by turning the needed amount of degrees:

Retrieved from "https://en.scratch-wiki.info/w/index.php?title=Point_in_Direction_()_(block)&oldid=313884"
Cookies help us deliver our services. By using our services, you agree to our use of cookies.
Categories:
The Wiki is working on a dark theme, and you're seeing it! Got feedback? Post on the Wiki Forum Topic.