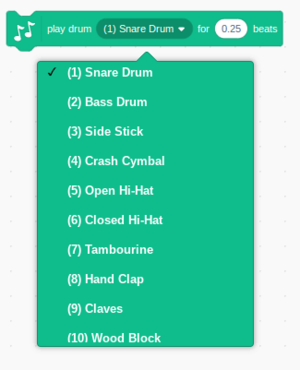 The drop-down menu for the block.

The Play Drum () for () Beats block is a music block and a stack block. The block will play the specified instrument for the specified amount of seconds using a sampled percussion instrument. Even though the block uses the word "drum", the choices in the drop-down menu are many different percussion instruments including drums, triangle, bongos, cowbell, vibraslap, and various idiophones.

This block used to be called Play Drum () for () Secs, but was changed because the length of a beat can now be changed with the Set Tempo by () bpm block.

Entering a value less than 0 or greater than 18 for the drum will cause the drum selection to be looped (for example, attempting to play drum 19 will play drum "(1) Snare Drum"). The number entered will also be rounded to the nearest whole number.

As the block plays an instrument, it is widely used when a song is played with the Sound blocks.

Some common uses for the Play Drum () for () Beats block:

In the switch from Scratch 1.4 to Scratch 2.0, some of the drums were not available in Flash. To deal with that, there are two versions of the drum block. The obsolete one is the one that was used in Scratch 1.4 projects.