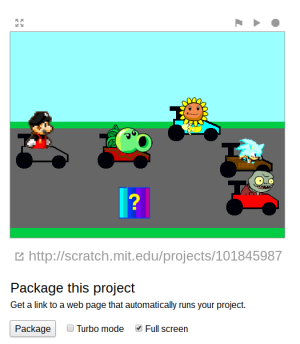 Phosphorus is an alternative player used to run Scratch projects. It has the same aim as the Scratch HTML5 Player, but is still being actively developed. The player runs in JavaScript and uses the HTML5 canvas to display scratch projects. Due to its use of JavaScript, it is widely known to make projects that use heavy or intense calculations run much faster than in the widely used Flash Player.

Users are known to use Phosphorus to view other users' unshared projects and give their feedback on the projects.[2]

phosphorus is an open source program, and the code can be found on GitHub. The phosphorus page also includes options for packaging and embedding projects on third party websites. The user can customize the appearance of the embedded project to some extent, such enabling or disabling controls.

Retrieved from "https://en.scratch-wiki.info/w/index.php?title=Phosphorus_Player&oldid=304786"
Cookies help us deliver our services. By using our services, you agree to our use of cookies.
Category:
The Wiki is working on a dark theme, and you're seeing it! Got feedback? Post on the Wiki Forum Topic.