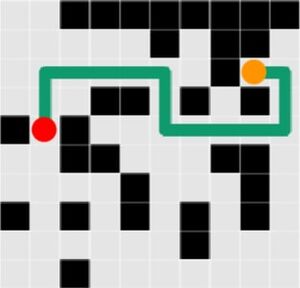 Figure 1: A very basic pathfinding algorithm is used to find the shortest path between the two dots in this grid system.

Pathfinding is the ability for an artificial intelligence system to deduce the proper path around obstacles to reach a destination point. For example, in Scratch, a sprite may be required to go around walls to reach a point, as in a maze. In the famous arcade game Pac-Man, the ghosts use pathfinding to make their way towards their adversary, Pac-Man. Pathfinding complexity can increase as more circumstances need to be analyzed.

Prior to the development of modern day 3D video games, pathfinding was more simplistic with the 2D environment, such as Scratch. Over time, pathfinding algorithms became more complex, intelligent, and multidimensional. As the power of central processing units has increased, computer hardware has gained more resources to calculate larger, more complex paths. Some pathfinding uses a grid-like system with "ortho" movement whereas others may incorporate diagonals and curves. One game that is notable for its pathfinding is Roller Coaster Tycoon from 1999, which managed to handle thousands of guests and their paths on up to a 256x256 x and y grid, along with the vertical dimension.[citation needed]

This example will use a 10x10 grid. Adapting to a different-sized grid is simple. Each box in the grid system needs to be identified in some way. A two-value system is used for this, with a box having an "x" value to represent it's position on the horizontal axis, and a "y" value to represent its position on the vertical axis. Adding a third dimension would require an additional "z" value and tweaks to the scripts. 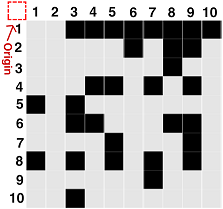 Figure 2: A numerical representation of a grid system. In this particular grid the origin is off the grid in the top-left.

Finding the quickest path between two points first necessitates knowing the grid coordinates of the two points. Many lists must also be used for the artificial intelligence to keep track of its progress and to map out what grid boxes are walls that the path cannot pass through or open for travelling. A list called "layout" can be created for this representation.

This requires some mathematics because a 2D grid is being transposed into a 1D list. To make it easier on the project creator, a custom block should be created to determine a grid box's list index based on its "x" and "y" coordinates. The simplest method is read the grid as if it is a book, starting from the top-left, reading rightward, and moving down one line at the right end. An example of this in a smaller grid can be seen in Figure 3. 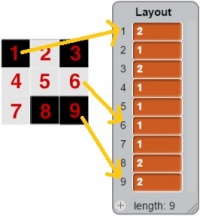 A custom block that takes a box from Figure 2 and determines the list value as represented in Figure 3 is shown below:

The artificial intelligence uses a counting system to determine the proper pathway. It works in circles by checking the boxes bordering the endpoints. It then goes to each of those boxes and checks the boxes all bordering them. A counter is used every time, so on the second round of "circling", the number "2" is assigned to the boxes, and so forth. Boxes may be checked multiple times since every box is surrounded by more than one box; the boxes will only be overwritten with a lower value, never a higher one. Ultimately, the final pathway follows the lowest values. This will all be explained in more detail for a thorough understanding.

Running the "set counters" custom block will complete the first phase of the pathfinding process. This essentially will map out a counter-based arrangement of values on the grid that the artificial intelligence will use to make its pathway. Not every grid will be a 10x10 grid as in the example above, however. If the grid system uses a different origin and coordinate plane than in Figure 2, the "list position" custom block will need to be adjusted so the "listpos" variable points to the proper list index.

Likewise, if the grid size increases or decreases, the parameter inputs into the "list position" custom block will need changed accordingly. For example, if the column of rightmost boxes has an x position of 24, the "maxx" parameter will need to be changed to "24" when the custom block is used. A larger grid will also need a higher initial counter value. This can be easily accomplished by changing the "100" in the list block in the "reset data" custom block to any arbitrarily large value.

The "counter" system created in Step 1 is used to determine the quickest path. The counter system started at the endpoint, but the path determination contrarily begins at the start point. It will look at the four adjacent boxes (it detects if an adjacent box is off the grid), determine which box has the lowest counter, and set that box as the next one to move to. It will repeat this process until the end point is reached.

If this is attempted from the end point to the start point it may not work. It can result in the pathfinder getting trapped in a dead-end. In the process, if two or more adjacent boxes share the same counter value, any one can be moved to. The "all_counters" list stores the definite counter value of every single grid box and is analyzed for this process.

Two lists are used to store the final pathway. These can be called "pathx" and "pathy", which store the coordinates of the grid pathway. The first item in the list is the starting point, and the last item will end up as the end point. For the pathway between the start and end, a custom block can be made to help the artificial intelligence decide which bordering block is the next best move, using the counter system from Part 1.

Step 3: Wrapping it all Together

One final custom block can be created to provide the project creator with a single-block method of finding the quickest path between two points. It will utilize the "set counters" and "route" custom blocks from Steps 1 and 2 respectively.

While not used above, the minimum and maximum parameters for the grid can be incorporated in some way to create a more universal custom block that can work with any sized grid; they are added for convenience. Once the path is generated into the "pathx" and "pathy" lists, the path can be traced out, travelled gradually, or traversed in any desired manner with other scripts not included in this tutorial.