A password is a series of characters required to log into an account. A password is created along with an account and username. Passwords consist of letters, numbers, symbols, and/or spaces. A good password is not easy to guess but not hard to remember. Passwords should not be told to other users. The Scratch website requires passwords to be at least 6 characters long. It is good to write down one's password on a physical piece of paper in a safe location in case the password is ever forgotten. Passwords are case sensitive. 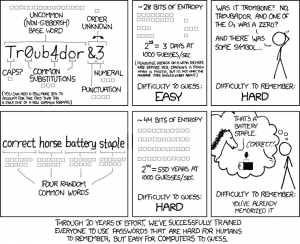 The xkcd comic demonstrating this section

A common misconception is that the way to make a strong password is by using common substitutions (such as @ for a, $ for s, etc.) and adding numbers/symbols at the end. However, this actually does not result in a significantly stronger password as those are all trivial for a computer to guess. They do result in a password that is much harder to remember, though.

A better technique to make a strong password is to use four or more common but random and unrelated English words strung together. (For example: "phoneticketdigitalscissors". Please do not use this as your password now that it has been used as an example here.) Although this at first may appear less secure, consider the math: there are about 3,000 words that account for 95% of usage in English. The number of combinations for n common words is 3,000n. This means that for 4 words, there are about 8.1x1013 combinations. At 1,000 guesses per second, that would take more than 2,000 years to guess. However, provided that the password is memorable, there shouldn't be too much interference if letters, numbers, symbols or different capital letters are added.