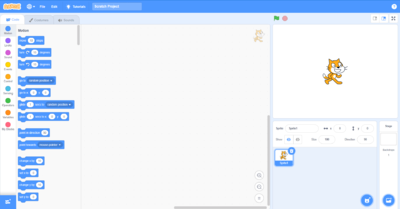 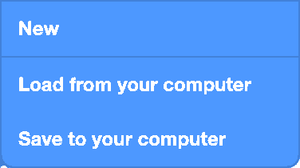 The File menu of the offline editor

The Scratch app, otherwise known as the Scratch offline editor, is a version of Scratch 3.0 that can be downloaded and installed on a computer, as opposed to being used in a web browser like the Online Editor. This is useful for those who wish to use Scratch without an internet connection or for class teachers who wish for their students not to participate with the online community. Scratchers also use it for creating a new version of their game without other users noticing.[1]

Main article: What are the system requirements for Scratch?

For the Scratch app to run properly, the following minimum system requirements are needed:[2]

The Scratch app is slightly different from the online editor. Projects are named by saving the project to one's computer (unlike the online editor, where a text input above the stage is used, though changing this text input in the app will change the name of the saved file). The tutorials also appear in the Scratch app. The top-right of the project editor, instead of displaying the login link or one's username, includes a question mark, which when clicked, has a menu that leads to the about screen, privacy policy, or data settings.

The app saves all projects in .sb3 format.

If installed from an app store, it updates automatically when a new version is available. The direct download version intentionally does not have this feature.[7] Additionally, on Android and Chrome OS, the projects are saved within the app, instead of being downloaded by the user. [citation needed]

Cloud variables are not available in the offline editor, possibly because users cannot log in.

The offline variable creator has no cloud data function.

The backpack is also not included in the offline editor, possibly because users cannot log in. [citation needed]

Projects made in the Offline Editor can be uploaded to the Scratch Website and shared by opening a new project online, going to the file tab, and clicking "upload from your computer." However, the Offline Editor cannot directly upload projects to the Scratch Website. Uploading projects might be supported in a future version,[8] and will be a similar process as to Scratch 1.4 and Scratch 2.0; however, it will not allow project instructions, notes, or tag inputs directly from the upload.[citation needed]

Retrieved from "https://en.scratch-wiki.info/w/index.php?title=Offline_Editor&oldid=317520"
Cookies help us deliver our services. By using our services, you agree to our use of cookies.
Category:
Hidden category:
The Wiki is working on a dark theme, and you're seeing it! Got feedback? Post on the Wiki Forum Topic.