For more information, see MIDI on Wikipedia. MIDI stands for Musical Instrument Digital Interface. It is a standard specifying a way in which software and electronic devices can transmit and receive music. The Play Note () for () Beats block plays a note with the pitch represented by its input according to the MIDI Note System, and it can be used repetitively to play any sequence of MIDI notes. The volume, tempo, or instrument used can be changed seperately.

Play Note () for () Beats uses the MIDI note system. Each note is represented by a number. A note can be selected by either typing in a number or pressing a key on the virtual keyboard. 60 represents middle C. Adding or subtracting 1 is equivalent to moving one semitone higher or lower, respectively. Adding or subtracting 12 changes the note by one octave.

MIDI may be tricky to use since it does not have the regular notation for notes and durations. These diagrams might help: 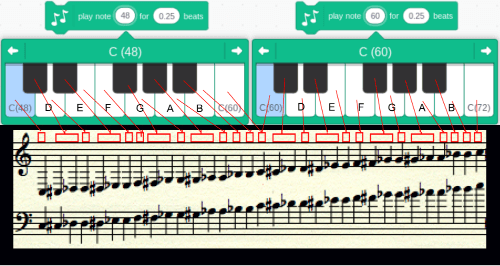 A list of the instruments available prior to Scratch 2.0 can be found here.

Scratch 1.3 was able to generate MIDI notes from the microphone, using the Note block.

Retrieved from "https://en.scratch-wiki.info/w/index.php?title=MIDI_Notes&oldid=307250"
Cookies help us deliver our services. By using our services, you agree to our use of cookies.
Categories:
The Wiki is working on a dark theme, and you're seeing it! Got feedback? Post on the Wiki Forum Topic.