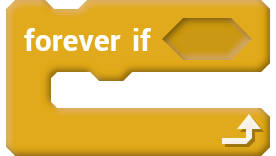 This block can be simulated with the following code:

Despite the simple workaround, multiple users have suggested the block be brought back,[3][4] because it seems more natural to use for those newer to programming.[5]

Retrieved from "https://en.scratch-wiki.info/w/index.php?title=Forever_If_()_(block)&oldid=134502"
Cookies help us deliver our services. By using our services, you agree to our use of cookies.
Categories: