In May of 2008, the Playful Invention Company (PICo), which was also known for creating several very early pre-alpha versions of Scratch 2.0, collaborated with Scratch to create a Flash-based version of the Scratch project player. This player used unique start and stop buttons, seen nowhere else other than Scratch Classmate.

In late 2009, John Maloney, the lead programmer of Scratch since 2003, began development on a Flash-based program simply titled "BlocksEngine". The blocks in this version resembled those in the final release of Scratch 2.0, and this version had very basic programming capability -- there were no sprites, only simple shapes could be drawn making use of a "rectangle (_) (_) w (_) h (_)" block. It has been confirmed that this program did indeed evolve into Scratch 2.0, as parts of its code are seen in Scratch 2.0's source code. Several versions of the BlocksEngine program are still available for download on John Maloney's MIT site here.

iScratch V2 was an early codename for Scratch 2.0. The earliest pre-alpha versions of Scratch 2.0 were labeled this. These versions were developed in collaboration with the Playful Invention Company (PICo), and date from May to August of 2010. These versions can still be downloaded from the PICo site here.

Meanwhile, in February 2011, the Flash Player entered the Scratch website, though the Project Editor did not come in Flash yet. The Flash Player was a way to view projects online, while carrying the benefits of faster projects, causing many Scratchers to applaud it. As time passed, the project viewer received many updates, and later became the official project viewer on May 9, 2013. 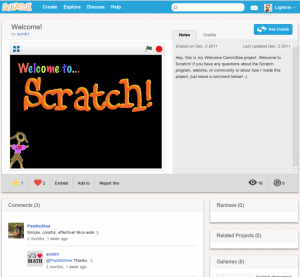 Retrieved from "https://en.scratch-wiki.info/w/index.php?title=Development_of_Scratch_2.0&oldid=317828"
Cookies help us deliver our services. By using our services, you agree to our use of cookies.
Categories:
The Wiki is working on a dark theme, and you're seeing it! Got feedback? Post on the Wiki Forum Topic.