The context menu in the Scripts Area.

A context menu is a menu which provides extra options about an item. Context menus are traditionally accessed by right-clicking or control-clicking. 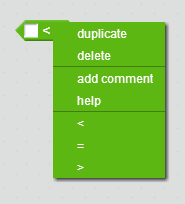 In Scratch 2.0, the Define () block has an "edit" option to change the parameters of the procedure.
Costumes
turn into new sprite — Removes the costume from the current sprite, and adds it to a new one, with no other costumes, scripts, or sounds.
export this costume — Exports the costume as a file on the user's computer.
Sounds
export this sound — Exports the sound as a file on the user's computer.
Sprite thumbnails
show — If the hide block has been activated on it, it shows the sprite. If the ghost effect is above 70, it sets it to 0. If the size is less than 10, it is set to 100. If the absolute value of the Y position is greater than 180, or the absolute value of the X position is greater than 240 (i.e. the costume center is off of the coordinates of the Stage), it moves to 0@0. If it is not on the top layer, it moves to the top.
export this sprite — Exports the sprite as a .sprite file on the user's computer. (In Scratch 2.0, this is "save to local file".)
duplicate — Creates a copy of the sprite.
delete — Deletes the sprite.
save to server — It is unknown what exactly this does, or how, but it most likely saves the sprite to the server. (Added in Scratch 2.0.)
Sprites on the Stage
The "export this sprite", "duplicate", and "delete" options are here as well, but "show" is unnecessary because if it wasn't visible, it couldn't be clicked.
grab screen region for new costume — Select an area of the Scratch IDE to become a new costume for the sprite.

Retrieved from "https://en.scratch-wiki.info/w/index.php?title=Context_Menu_(1.4)&oldid=68669"
Cookies help us deliver our services. By using our services, you agree to our use of cookies.
Categories:
The Wiki is working on a dark theme, and you're seeing it! Got feedback? Post on the Wiki Forum Topic.