Bingo is a Scratch Modification based on Scratch 1.4 that extends Scratch's programming ceiling by adding more blocks and capabilities as well as making it easier to work with projects by adding usability enhancements.

Bingo has changes to Scratch's interface, blocks, menus, and dialogues. 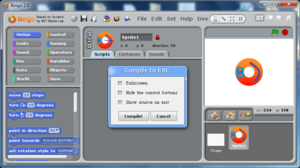 Bingo has a total of approximately 80 added or modified blocks. These include:

This is a new category in Bingo that deals with program and file options.

This is a new category that deals with things not included in other categories.

Retrieved from "https://en.scratch-wiki.info/w/index.php?title=Bingo_(Scratch_modification)&oldid=299396"
Cookies help us deliver our services. By using our services, you agree to our use of cookies.
Category:
Hidden category:
The Wiki is working on a dark theme, and you're seeing it! Got feedback? Post on the Wiki Forum Topic.